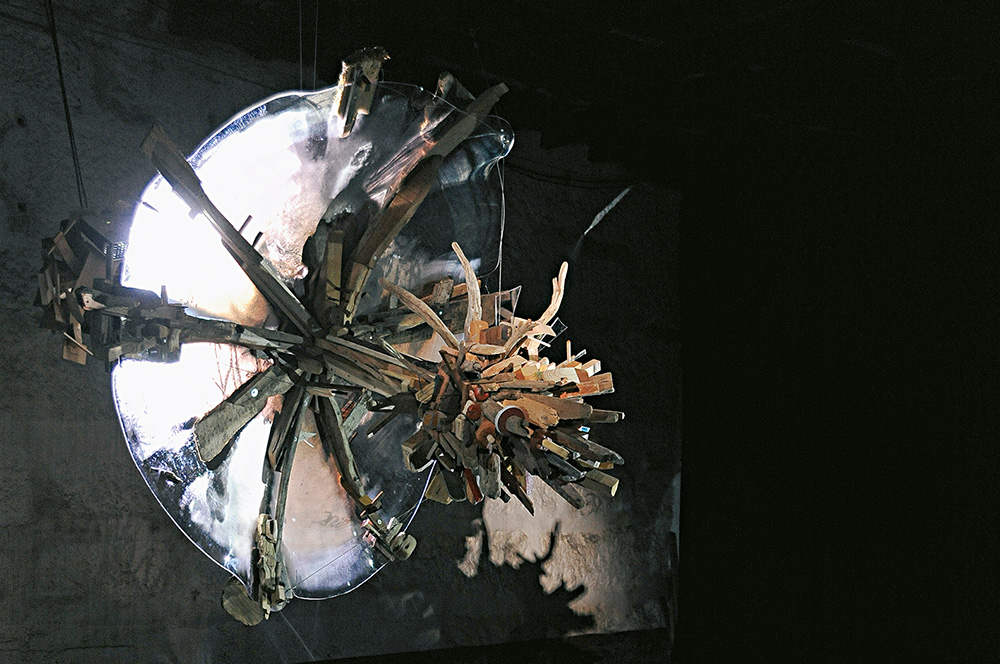 This installation was conceived for the Portuguese city of Guimarães, where it was premiered within the events of the European Capital of Culture 2012. The Transmitter is an impressive, monumental multichannel video sculpture that thematizes the questions of communication and connectedness between the elements of water and space and man. Its central part consists of found driftwood that frame the modulated video collage accompanied by sound. Its central emphasis is in the motive of water as the all-pervasive elements that feeds and translates the memory of the world, while at the same time it is the basic prerequisite for the evolution of life. Nepraš milks the blasphemic idea of water as the carrier of memory: are the oceans where all the waters of the world convene, pools of information that could be conveyed to some unknown recipients out there with the help of a transmitter? This substantially provocative work convinces with its image and the cacofonic mix of live images. Transmitter opens up to the viewer as a living organism, saturated with many impulses that try to encompass the totality of life by the means of memories.

JAKUB NEPRAŠ (Praga, 1981) combines sculpture and animation/video in his work. He’s interested in the exploration of organic forms, mounted with new formal frames and semantic associations with the use of modern technology. He’s studied at the academy of visual arts in Prague. He’s received several prizes and awards, among others the best work award at the Arte Fiera in Bologna (2007). His works were exhibited in the Czech pavillion on the EXPO fairs in Milan and Shanghai, while he also had several independent exhibitions all over Europe. He lives and works in Prague.

The hosting is co-financed by the Embassy of the Czech Republic in Ljubljana.