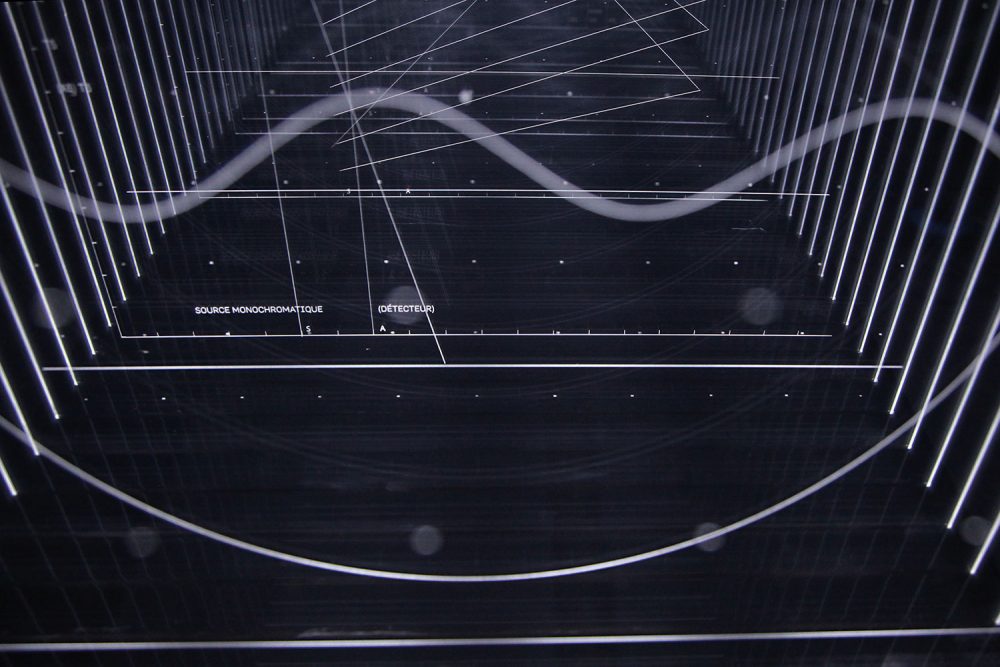 With the presented project, the new media artist Nicolas Bernier sets out to explore the relation between a particle and a wave: the project is namely based on the fundamental dichotomy of a quantum particle that can be defined as either energy waves or physical matter. The artist applied these findings in the field of perceivable waves – both light and sound – and thus created an ambiental installation that leads the senses through poeticized forms into the world of quantum physics and its basic postulates. Animated designs of geometrical matrices on acrylic panels are arranged in space to simulate the unpredictability and elusiveness of the quantum particle, and in this way they also hint at the essence or characteristics of the basic elements. Here we are witnessing the synchronicity of sound and image: bursts of white noise and all kinds of sound matrices, generated by synthesizers, create a unique waltz of light patterns and structures.

NICOLAS BERNIER (1977, Ottawa, Canada) creates sound performances, installations, live electronic music, acoustic improvisations and video works. He’s also active in the fields of dance, theatre and film, which are all often included in his transdisciplinary projects. At the core of his work lies the search for a balance between the rational and the sensual, between the natural and the (digitally) processed. He holds a PhD in sound arts from the University of Huddersfield in Great Britain. He’s a member of the new media and research centres/initiatives Perte de signal, CIRMMT and Hexagram in Montreal, Canada. He received, among other awards, The Golden Nica award at the Ars Electronica in Linz in 2013.