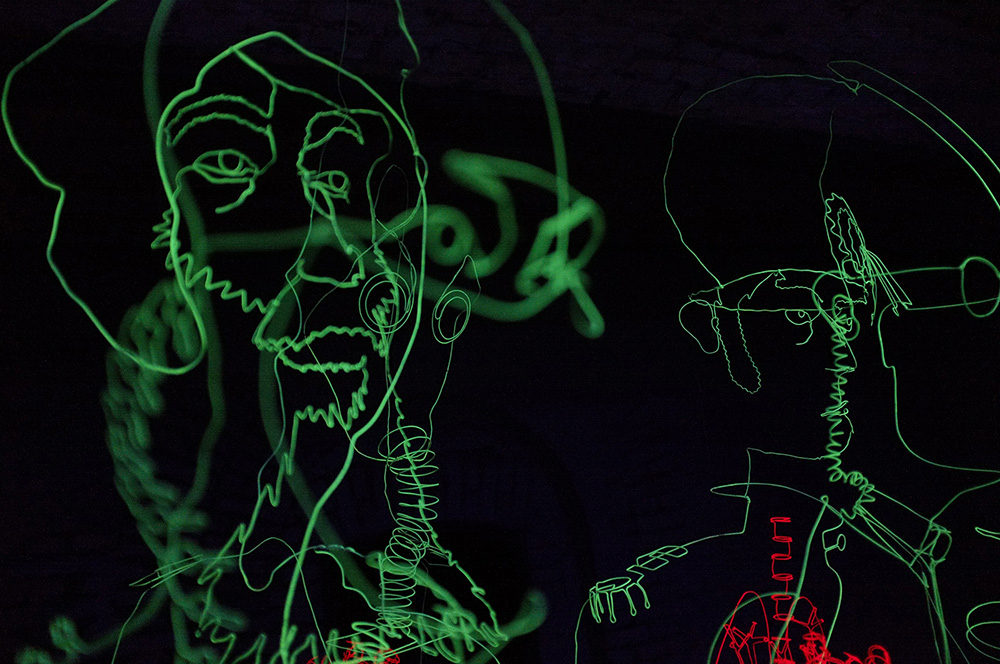 Ralf Westerhof: Out of the Dark

Ralf Westerhof uses wire and light to create spatial drawings the perception of which depends on the viewer’s point of view. This interactive installation in the Vžigalica gallery thematizes the image of the enemy and puts forth its ambiguous appearance as it’s manifested on the level of the collective memory, or, respectively, through media mediated images: shapes, only a few years ago deemed completely innocent, today, in the time of the paranoid hysteria of the mass media, offer completely different interpretations. The first part of this bi-fold installation is the heart, whose beating is controlled by the visitor who triggers the symbolic identification with the pulsating object. The second, central part of the installation confronts the visitor with a series of intriguing figures – images of Other – whose acccentuated hearts serve to identify with the foreign and the unknown. The work thus uses a sublime metaphorical language to deconstruct the deceptive image of the enemy in order to bring it closer to ourselves.

RALF WESTERHOF (1977, Amsterdam) started his creative career as a theatre scenographer. Later he created several kinetic sculptures made of wire. In 2014, he took part in the lighting festival in Amsterdam and this resounding performance enabled him to subsequently realize a series of new productions and exhibitions all over Europe, as well as in Asia and South America. He was thus included in exhibitions and festivals in Gent, Singapore, Bucarest, Berlin, Norrköping, Bogota … He also deals with the contemporary dance arts. He lives and works in Amsterdam.