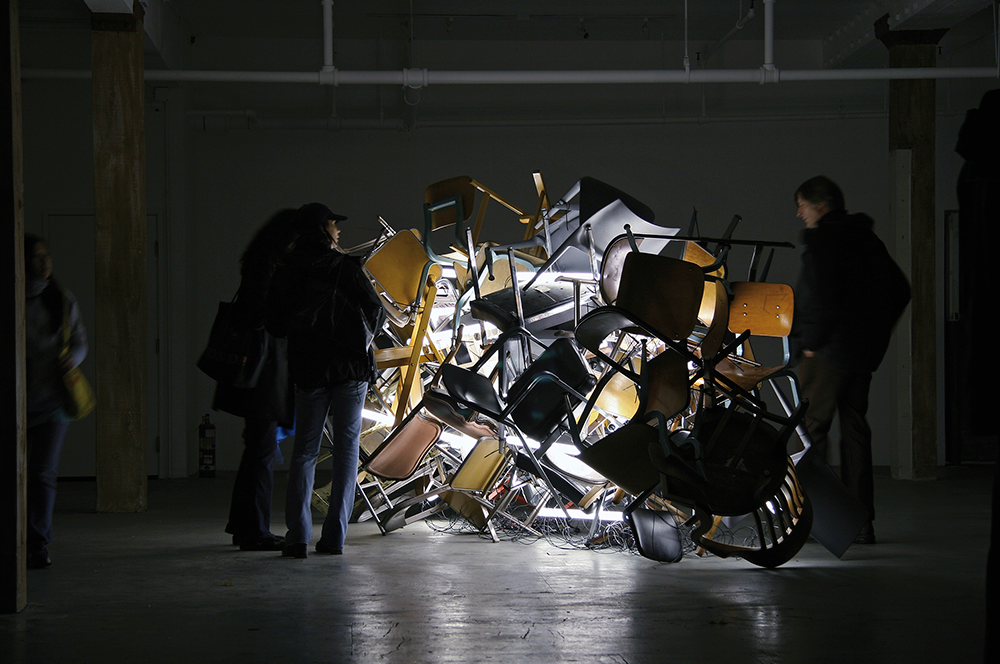 The Croatian artist Viktor Popović often employs the ready-made method in his work. He includes completely useful objects in his works: by confronting art and everyday reality he questions the relation between them. The main elements of his installation this time are used chairs, borrowed from individuals and from a theatre. Perfectly useful pieces of furniture, marked with traces of their use and used-up-ness mutate in this new context into a non-functional, but visually attractive mass of shapes illuminated by a neon light. The chairs, by the means of the artist’s gesture of appropriation, turn into exhibits, into an artwork that contains the memory of its previous use. When the chairs return to their owners after the exhibition, they will regain their ordinary status and usage, but a memory of their presence in the context of an art exhibition will remain inscribed into them forever.

VIKTOR POPOVIĆ (1972, Split) graduated in painting in 1996 at the academy in Zagreb. He’s worked as the assistant for drawing and sculpture at the Artistic Academy at the University of Split since 1997, where he was promoted to assistant professor in 2002, and later into associate professor in 2009. He’s contributed to many independent exhibitions at home and abroad. Among others, he’s received the best young artist award, awarded by the Croatian association of visual artists (Zagreb, 2006), modern art award Filip Trade (Zagreb, 200,5) and the Great award of the VIII. Triennial of Croatian sculpture (Zagreb 2003). He lives and works between Split and Zagreb.