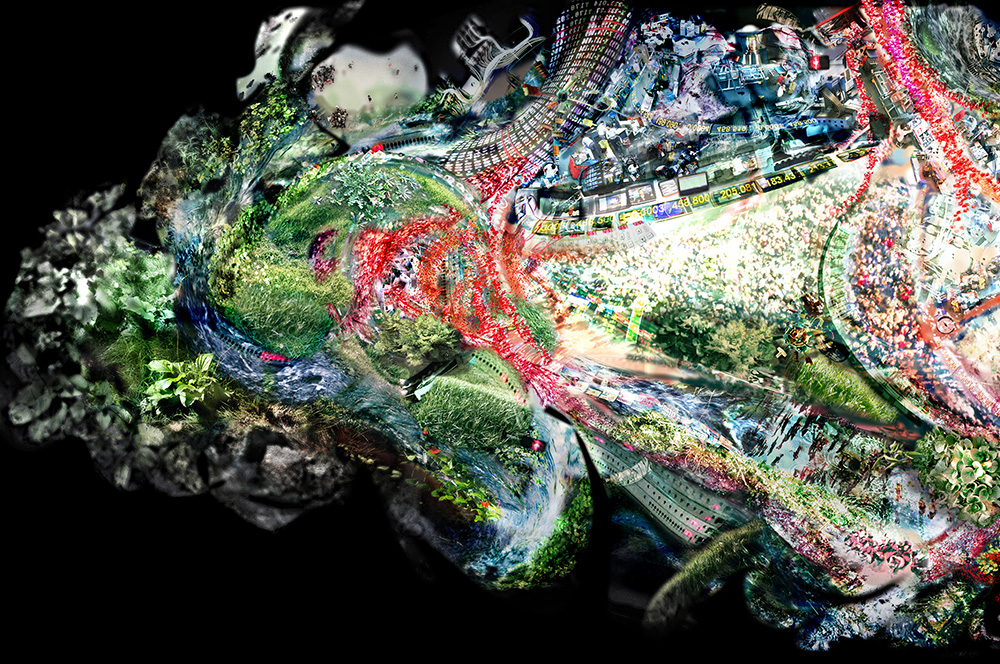 The Czech artist Jakub Nepraš often thematizes the condition of the modern society and the influence of the modern technology on the environment and interpersonal relationships. His works originate from the world of organic shapes, transformed by the artist into saturated cacofonic structures. Especially his video works represent peculiar visual palimpsests where meaningful layers of various forms are intertwined. The video titled Fossil shows a resuscitated being whose innards and neural system run innumerable images of the modern world; the fossil as a relic of previous lives transforms into a lively and bubbly mass that seems to embody the last phase of the evolution of a contemporary existential experience, it’s chaoticness and interconnection. This unusual meta-organism is transforming in front of the visitor’s eyes into a metaphorical image of the present, as it will perhaps be seen by our descendants as some kind of fossilized modality of modern life.

JAKUB NEPRAŠ (Praga, 1981) combines sculpture and animation/video in his work. He’s interested in the exploration of organic forms, mounted with new formal frames and semantic associations with the use of modern technology. He’s studied at the academy of visual arts in Prague. He’s received several prizes and awards, among others the best work award at the Arte Fiera in Bologna (2007). His works were exhibited in the Czech pavillion on the EXPO fairs in Milan and Shanghai, while he also had several independent exhibitions all over Europe. He lives and works in Prague.

The hosting is co-financed by the Embassy of the Czech Republic in Ljubljana.