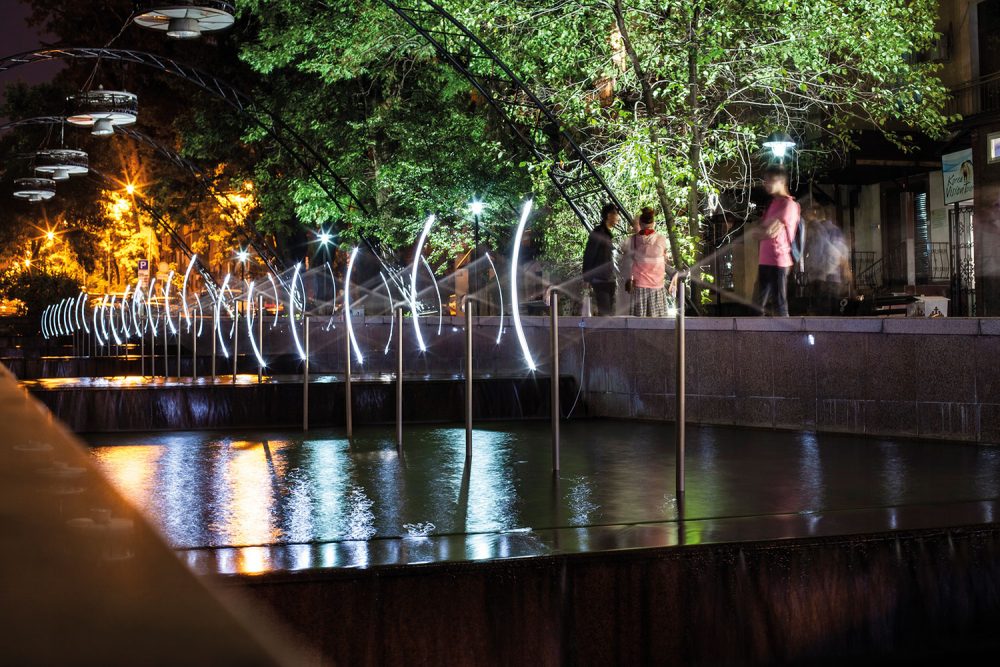 Lumitronome is part of the Metronomi / Metronomes series with which Martin Bricelj Baraga develops modular installations for the public space that operate based on the perpetuum mobile and energy transformation principles. He combines natural elements such as light, air and water to test the possibilities of infinite motion in repetitive patterns. His experimental works, inspired in the repetitiveness of the metronome, evoke natural forces as a source of energy that can be transformed into other forms through modern technology. This meditative kinetic installation makes use of solar energy to transform it into a moving light object. Luminotrome, created in collaboration with Bellastock, an architecture studio from Paris, is built from scrap materials and is as such a great example of their repurposing. The end result is a poetic ambiental setup that resembles a flock of birds or the rustling of leaves and fascinates the viewer with its peculiar rhythmic sequences.

MARTIN BRICELJ BARAGA is an intermedia artist and curator. His works explore the relations between spaces, environment, nature, technology and people. His installations and interventions are often set in unusual urban contexts or natural environments. He created many interactive works based on the creation of entirely new situations in public space, which for him is a concept that he himself understands very broadly and includes both actual spaces in cities or nature as well as virtual worlds. His procedural works are firmly anchored in time and expose time as one of the key elements. The materialization of work is often merely a trigger that establishes a project which is later developed in interaction with its users.

He’s received many international awards for his work, including the Glow festival award, the Wro media biennial award, the Europrix Multimedia award, Memefest awards, Baltimore Magazine award etc. He’s the director of the MoTA – Museum of Trasitory Art, a co-founder of the SONICA festival and member of the Nonument Group art & research collective.